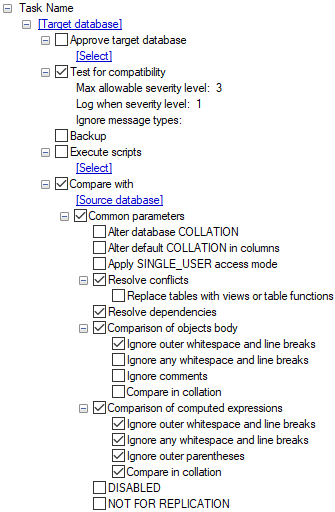 A target database to compare and synchronize. You can establish a connection to the online database or select a database structure file.

Allow the selected online database to be used as a target database for this task? This feature is designed to filter the target database selection to prevent accidental execution on a wrong database or on a database that does not meet certain requirements. For example, we can check if it belongs to our product, the required version, or has other required states, etc. Typically this feature is used in update packages.

See an example in the template file for more information. You can save it using the dialog box as a new file and edit it manually by following the instructions in the comments.

Test for application compatibility with the databases functionality. AutosyncDB covers the most commonly used types of objects, their properties and functionality, allowing you to effectively compare and synchronize them. However, there is some functionality that is not yet supported, is very rarely used, or is too localized for synchronization.

This test can only identifies KNOWN compatibility issues and provides additional information on them. Each message has a unique code and is characterized by a severity level (do not confuse with the severity level of errors in SQL), the threshold values for which can be specified in the task settings.

The compatibility test executes after the preparatory script has executed, but before the comparison, export, or sync script execution.

Severity levels range from 1 to 5. The higher the level, the more serious it is. The levels are assigned based on an assessment of the risk of implicit overwriting or possible loss of functionality during synchronization; its importance for the implementation of a specific architecture; belonging to the "main" or "extra" functionality; the complexity of managing this functionality using a manual script; and the degree of dependence on other database functionality. Also, the level can be increased if the functionality is directly related to security.

Specifies the maximum allowable level of severity. Values must be in the range from 0 to 5, where zero does not allow incompatibilities and 5 tolerates any.

Specifies the lowest severity level for messages to be logged. Values must be in the range from 1 to 5.

Specifies message types to ignore. Use a comma as a separator.

Create a backup of the target database in a default server location before the updates.

Execute a custom script to prepare the structure of the target database. This script will be executed before the comparison and synchronization. You have to do all special modifications in this script that can't be done by the application such as rename tables or columns, change type of an existing column with the particular data calculations and type casting, etc.

You can select the one SQL file or script listing file. To create a listing of SQL files just select them in the order of their execution in the Dialog.

Also you can use this feature just to run custom SQL files on the target database without the synchronization process.

Turn off AUTO_UPDATE_STATISTICS_ASYNC and apply the SINGLE_USER access mode for the target database with ROLLBACK after 5 seconds. All the values will be restored at the end.

Drop objects in the target database that conflict with the objects in the source if they need to be created or modified. This option includes checking for object name conflicts, conflicts of a clustered key/index, conflicts in object purpose (there can be no more than one clustered key in a table or default constraint for a column, two objects with the same name, etc.)

Ignore whitespace and line breaks at the beginning and at the end.

Ignore any whitespace and line breaks

Compare objects body in the default database collation except 'string literals' and "double quoted string literals or identifiers". Otherwise, the ordinal comparison rule will be used.

Ignore the outer parentheses at the beginning and at the end.

Set this option to change the DISABLED property of objects. Otherwise, the comparison algorithm will try to inherit these values ​​from existing objects.

It is not recommended the presence of disabled key-constraints and indexes in the source database. They superfluous dependencies on the table or view for which they were created, can disable another dependant indexes, and cannot always be properly processed by the comparison algorithm.

Set this option to change the NOT FOR REPLICATION property of objects. Otherwise, the comparison algorithm will try to inherit these values ​​from existing objects.